Here is his fourth posting.... 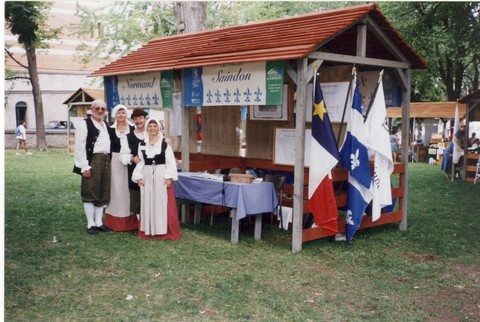 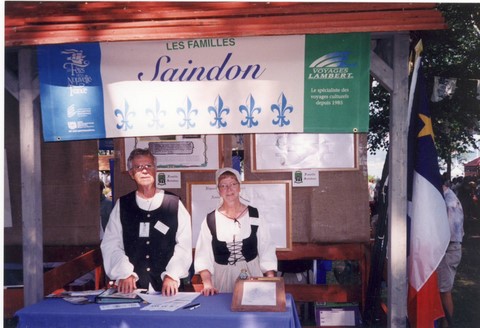 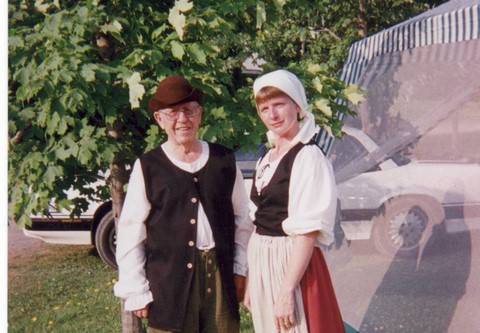 As the Quebec Federation of Family Associations invited us to participate in the Fêtes de la Nouvelle-France we took the opportunity to organize our annual Reunion to coincide with the event.
More than 25 members, most accompanied by their spouses and a number of children (for a total of 65 people) participated at the 1998 Reunion which took place at the Camping La Relâche on 7-9 Aug under  sunny but torrid hot weather (fortunately there was a pool).

The program was the typical sequence :
Saturday afternoon was free to visit the Fêtes de la Nouvelle-France where the Association had a booth. Our first ancestors, Michel Saindon and Marie Yves Godin dit Bellefontaine, were present and were delighted to meet their descendants.
Everything concluded with our participation in the final parade Sunday from the Plains of Abraham to the Louise Bassin. 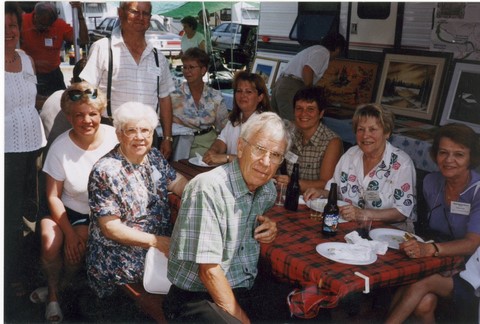 Thanks to all those who participated. 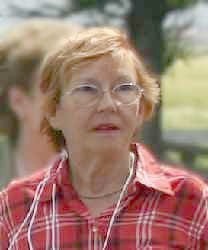 In preparing this chronicle, its our pleasure to introduce you to our aunt Lorraine Saindon Bernier.
Born in St-Arsène, daughter of Jean-Baptiste Saindon and Zoïle Desbiens, Lorraine did her nursing studies in Rivière-du-Loup.
Upon graduation, she began working in the hematology laboratory at the St-Sacrement Hospital in Quebec City. Her initial interest was in cardiology patients, but soon she began treating patients suffering from hemophilia.
In 1979, Lorraine became the nursing coordinator of one of the four hemophilia clinics in Quebec, still at St-Sacrement Hospital. As hemophilia is a sickness with no cure, she would treat patients from birth until the end of their lives. Lorraine became part of the families, becoming a second mother for many of those suffering.
Unfortunately, twelve years ago, a shock hit the hemophile community, that drastically changed their lives and those close to them : AIDS and Hepatitis C. Lorraine was for many of them their source of moral support, the one who gave them hope, reduced their anxiety, and provided calm and reassurance.
At the end of her career, her devotion was recognized by both her work colleagues and her patients. In fact, the Canadian Hemophilia Association presented her with the prestigious appreciation award in 1995, recognizing her excellence and contibutions to treatment. It is interesting to note that she was the first Canadian nurse to recieve this award. In 1997, she recieved the mention of excellence from the Centre hospitalier associated with the University of Quebec.  Later in the same year, the fifth annual convention of Canadian Association of Nurses in AIDS care, in Toronto paid hommage to Lorraine in awarding her the Jill Sullivan award. This award of excellence is given in recognition of exceptional treatment provided to hemophiles suffering from HIV and her support to their families over more than 35 years.
It is with great pride that we congratulate you.
Bravo Lorraine

This site is also available in French.
To learn more about your genealogy, click on this link
Becoming a member
to register with the Association and have access to the up-to-date database of your genealogy and to all the other advantages of being a member.
Joining the Association means being part of a large family proud of its origins, ancestors and descendants.

The Fêtes de la Nouvelle-France required that each participant wore a traditional costumme.
It is because of the determination of André Saindon (Cacouna) and Lucine Deschênes that three pars of costumes were made up.
They were wore at annual meeting during many years but this tradition is now forgotten...

This exposition was very successful and it was organized again at Isle Verte Reunion in 2013.

The Association bought the microfilm of the Registry. Later André Saindon had it printed and it was utilized by Andrée Thinel and Louise Camirand for its transcription that was published in 2015.

This is one of the first article of this topic hightlighting some Saindons for their accomplishment.
It is written by her nieces, daughter of André Saindon and Lucine Deschêne.
Lorraine passed away in 2014.